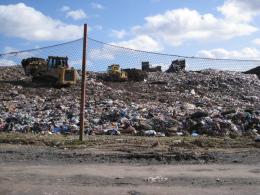 The United Kingdom is in an everlasting battle with its lack of space. With the country’s constantly growing population, we’re met with an ever increasing need for new housing, facilities and work places – A demand which we are struggling to meet.

However, there’s a side to population growth that’s not often accounted for. A growing population within the UK, in theory, produces more waste. As a country, our landfill sites are already at critical levels. In 2010, Gary Porter (Chairman of the Local Government Association’s Environment Board) warned that the UK “will run out of landfill space in less than 8 years time”.

Under the EU landfill directive, the UK must reduce landfill levels to just 35% of what they were in 1995 or face hefty fines. Unfortunately (for hitting these goals), the UK population has increased by over 7 million people from 1995 to 2015.

Part of the success (of sending much less to landfill), is due to increased awareness and availability of recycling services. In 1995, just 6% of waste was recycled, compare that to 2015’s 44.3% recycling rate and we begin to see where a lot of the waste is going.

As a country, not only are we sending less waste to landfill as a result of recycling more, but we’re overall sending less biodegradable waste to landfill. The United Kingdom has managed to reduce is Biodegradable Municipal Waste from 35.6 million tonnes in 1995 to just 7.6 million tonnes in 2015. This puts the UK well ahead of EU targets (35% reduction of 1995 rates by 2020) at roughly 30%.

Currently, the UK is well on track to meet its requirements for waste recycling and waste sent to landfill by 2020. It seems as though the UK is winning this battle but the war is far from won. As of 2010, waste in landfill accounts for 43.6% of methane emissions and takes up as much space as Warwick. We are already utilising a small amount of this gas to produce roughly 3% of the UK’s energy, and it’s suggested it takes just 10 years for landfill sites to be transformed into national parks.

Until our nation’s waste management becomes so efficient that we have to import rubbish from countries, just like Sweden does, we’ve got a little way to go. However, all statistics point towards us being well on our way to a greener future.